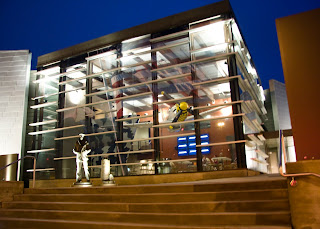 We spent several hours today at the Grout Museum in Waterloo, Iowa. Where they have just completed a new wing, the Five Sullivan Brothers Veteran's Museum. It honors the sacrifice of a Waterloo family, the Sullivans, who lost their 5 sons when their ship the USS Juneau was sunk by a Japanese Submarine.

While the the museum name and some displays honor their specific service and sacrifice, it goes beyond their sacrifice and honors veterans (Iowans) lost in every conflict starting with the civil war. It is an amazing addition and will take several trips to take it all in.

We took 4 of our 6 grandchildren and they had a good time learning, crawling on a WWII Tank (replica), coloring, making something with beads, and asking alot of questions. One of them asked, Grandpa, did you serve in a War?"

The short answer is "No", however I was at a loss of words to explain the effect the Vietnam War on on me. I had dropped out of college after one semester to earn some money to go back to school. I went back and was well into my my second semester when I received a letter that began, "Greetings...". I had received a draft notice for the U. S. Army. I joined the Navy instead and ended up spending 30 years. During that time I did not serve in a combat area. I've had a few "dicey" moments shipboard, and in an airploane or two, but was never in combat. There were a couple of times in the 1970's when it felt like combat when I was serving as a recruiter in Minnesota - the Federal Building was bombed (where my office was located)...but, that all passed.

It seems a little more than I need to check the information, because I was thinking: Why does not my GLOG these things!