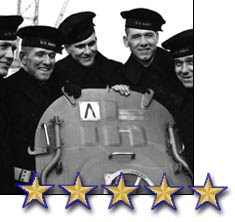 My wife and I recently attended a Five Sullivan Brothers Recognition for Military Commitment Banquet where we were shown a Grout Film in honor of the "Greatest Generation", the WWII era.

Sitting at our table was a WWII veteran. He name was Roosevelt (pictured above) and he served as a medic in the Army during WWII and was, I'd say, 80+ years old. He is an African-American gentleman, small of stature and bent over at the waist. He entertained us with stories. The 1st story he told happened 10 years ago when a gang member talked his way into Roosevelt's house, for the purpose of mudering him as a gang ritual. The guy (according to Roosevelt) was 7' tall and at least 300+ pounds. He told Rooselvelt to lie on the floor. To which Roosevelt replied, "No - I won't make it easy for you to kill me."
At that Roosevelt picked up an end table and started beating the crap out of the intruder. He got in several good blows before the intruder stabbed him. The knife was sticking out of Roosevelt's side and the young man said, "There...you're dead."
"Nope," said Roosevelt, I'll see you in court.
Roosevelt endured a lot of surgery and did in deed see the youg man in court.
Roosevelt's second story was current. It seems he was in the Chacago Ohara airport when a young "con man" grasped his hand (a gesture used to steal people's rings). Roosevelt, now in his 80s looked the young man in the eyes and said, "If you don't let go of my hand - one of us is going to see Jesus in about a minute and it ain't going to be me." The guy retreated...
Moral of the story - don't mess with the Greatest Generation...or at least Roosevelt...