It Was a Dark and Rainy Night 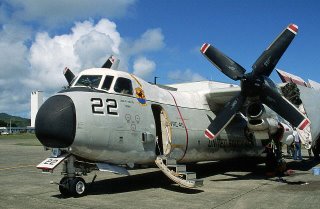 It was a dark and rainy night when the plane I was on started to fall out of the sky – it really was dark and rainy - I’ll get back to the weather report...but first let me begin my story at an earlier moment in time.

My oldest daughter Jennifer was born on March 9th, 1974. It was a happy and joyous occasion – but there was a cloud hanging over the event. In 2 days I had to deploy with the USS FORESSTAL, the aircraft carrier where I was stationed. The Navy did not (probably still doesn’t) consider normal child birth as a reason to miss a ship’s movement. The ship was scheduled to deploy to the Mediterranean for a 6 month cruise bright and early on Monday, March 11th. As I road the ship down the channel to the Atlantic Ocean, both my wife and daughter were still in the hospital. It was a difficult departure and journey – I had teary eyes all the way to the Azores.

I will always be thankful for the Navy wives who stepped up and watched after my wife and daughter as I left on deployment. They came together and fetched and carried, shopped, and cleaned. They ran the household. They even picked my mother-in-law up at the airport when she came to visit. My mother-in-law took over taking care of everyone, but the Navy wives were at the ready. Everything was going well until my wife came down with phlebitis (blood clots in her legs). The doctors at the hospital thought it was serious enough to send a message to the ship. My Commanding Officer gave me 30 days emergency leave and I came back to Virginia. (Now, there’s another story to be told about how I got back. Remember, I was on an aircraft carrier in the middle of the Mediterranean and it was not all that easy to get home.)

It took me over 48 hours of traveling to get home, and I arrived safely. The first thing I did was sleep after I found out everyone was ok. My wife was released from the hospital not too long after I arrived and we had 30 days to bond with the baby. My mother also visited, but her visit was cut short when my grandfather passed away.

Since I couldn’t stay on leave forever, I had to return to the ship. I didn’t want to, but the Navy has this thing called Unauthorized Absence where they put you in jail. Since jail didn’t appeal to me – off I went. I started my journey on a Sunday afternoon. The return trip was not going to be an easy task. I had to use a mix of civilian and government transportation and the two, at times, don’t mix well.

I flew from Norfolk, Virginia to Philadelphia, Pennsylvania where I was told it would take 2-3 weeks to get processed and on an airplane to Europe. I certainly didn’t want to sit for 3 weeks. The Navy has a “way” of keeping you busy, and typically they keep you busy with unpleasant tasks. Since I was a Personnelman (a guy who works in the personnel office) I volunteered to do 14 of the processing centers transfers if they’d let me be number 15. The Chief in charge thought that was a great idea and a deal was struck. I managed to leave for Europe after only 3 days in Philadelphia.

The last part of the trip back to the ship was on a plane which was going to land on the carrier. I was excited about the prospect. We had been in the air about ½ hour when smoke started filling the plane. At first it was a slight smell of something burning, and then smoke - a lot of smoke. The flight crew started yelling orders and frantically searching for the source of the smoke. In the process I was handed a parachute and was assigned to a ditching station. I was only a Seaman and did not possess a lot of knowledge about the Navy, ships or airplanes, but I knew enough to know that ditching in an ocean at night, was not good – even with a parachute. I figured this was it – gravity was finally going to get me. The plane started losing altitude – and then I heard shouts of, “...it’s out...it’s ok. It’s a seabag”

The pilot turned the plane around and landed in Palma. I had to stay over night and I was told to catch another plane to the ship the next day. However, when the next day arrived, the ship had now moved into another area of operations, so I could no longer fly out to land on the carrier. I had to meet the ship at its next port, so I took a flight to Naples.

The flight to Naples arrived about an hour after the ship had dropped anchor in the harbor. At this point I was finished with planes. I took a small boat out to the ship. It had been a long journey – over 7 days to get back to the ship. I was glad to be back to the ship– something I was surprised at feeling, but the ship was familiar territory. I may have been glad to be back, but my heart was still in Norfolk with the little girl I had just briefly met.

That was a great story! I had no idea what you went through to get to and from Virginia. Im glad you made the effort though!

Funny the places we in the military come to call home.

Robert all I can say is OUTSTANDING! I love this blog stuff myself. It allows you to learn more about a person and their family. I feel like I made the journey with you it was that life like.

You have done an outstanding job with your blog and you have inspired me to do the same!