They Bleed for Their Art 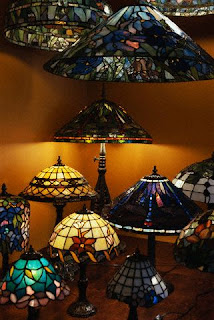 My wife and went to visit our son and daughter-in-law and grandkids in Cedar Rapids this last weekend. They own The Stained Glass Gallery in Cedar Rapids, Iowa and were working on creating a new stained glass piano light lamp shade for our church’s organ. They have, what I think is a clever slogan for their business, “We Bleed for Our Art.” And, it’s true; they work with glass and occasionally will get a small cut which requires a band aid and some antiseptic. Last Saturday however...

John, our son, was walking through the shop and ran his leg up against a protruding piece of glass. It ripped through his jeans and into his leg. It made a nasty cut and it was obvious it needed stitches because it was gapping and bleeding (a lot).

[Before I go on, you need to understand a bit about me and blood. I faint. I’ve gotten better over the years, but I do faint when there is blood, mine, or anybody’s for that matter. The first time I fainted was as a kid when my parents took me to the movie The Greatest Show on Earth. I fainted during the train wreck sequence when there was a fair amount of blood. My mother had to take me out. This history continued in high school biology labs, doctor’s appointments, movies, boot camp ...you get the idea.]

I remember when one of my daughters cut her lip and there was a lot of blood, it was all I could do to grab a washrag and a piece of ice and stuff it in her mouth and tell her to be brave---before I passed out.

This wasn’t the first trip to an ER I’ve made with John for stitches. And, as I recall I nearly fainted the first time, but controlled it BEFORE we got to the ER. John did have to drive the car however.

At any rate, we arrived at the ER last Saturday and John checked himself in and we began the wait in the ER waiting room. I started feeling the feeling that I get when the blood starts leaving my head and my blood pressure drops. Since I am also diabetic I thought perhaps I was just having a low blood sugar moment I sent my wife off in search of sugar. No sooner did she disappear than the faint came on strong. I could no longer sit in the chair and I went down on one knee...

One of the ER nurses who was coming into the waiting room to pick up someone else noticed my dilemma and came to my rescue. The first thing she did was run over my foot with the wheel chair, and then some how managed to get me into the chair, dropping me only once. I was totally passed out by the time she got me to the ER and she, with I assume the help of others, got me on a table. And, then they all got busy...an IV, an EKG, and removal of my clothes.

I understand that they were doing what they had to do, I do have a cardiac history and am diabetic and I imagine when someone is flopping around on the ER room floor they feel obliged to check the individual out. They checked me out.

John and I were in cubicles next to each other so my wife could bounce between us checking on our progress. As it turns out John had his wound cleaned and received his stitches before I was released and he ended up waiting for me to recover. I haven’t received the bill yet, but I imagine it is expensive to faint in the ER.


[COMMON FAINTING: Vagal reaction.
Fainting is a temporary loss of consciousness. It occurs when blood flow to the brain is reduced. A Vagal reaction is a reflex response that causes the pulse to slow down. If the pulse is low enough, the blood pressure falls and causes fainting or near fainting. Lying down usually stops the reaction within 60 seconds. This reflex response can occur during sudden fear, severe pain, emotional stress, overexertion or suddenly standing up after sitting or lying for a long time.

I tell you....you make me laugh. Was that me that cut my lip open??

I missed reading your stories. Don't forget to blog over tax season!!

I do have an after picture of the stitches, but I forgot to get a before. I can send them in for posting to your blog if you would like.

I just love your stories and never tire of them! When does your book come out? I want a signed copy!

This was funny. I enjoy visiting your blog often. The stories just keep me rolling all day. Keep up the good work and when that book comes out, I want a signed copy too!!